Team Apple Box had a blast at Step Forward 2016! The 6th annual walk for Parkinson Foundation Western Pennsylvania (PFWPA) took place at the Highland Park reservoir on Sept. 24th. Victoria Gricks designed our long sleeved team shirts so that we could “Walk it Like It’s Hot” despite summer’s end. Our mimosa and bloody Mary table was a hit, and our young Apple Boxers were right by our side showing team spirit by giving away candy and selling lemonade; it’s never too early to start giving. This year, our team reached out to friends and family members, cumulatively raising over $2,000. Year-round, Apple Box Studios donates pro-bono marketing and creative services for the fight against Parkinson’s disease. 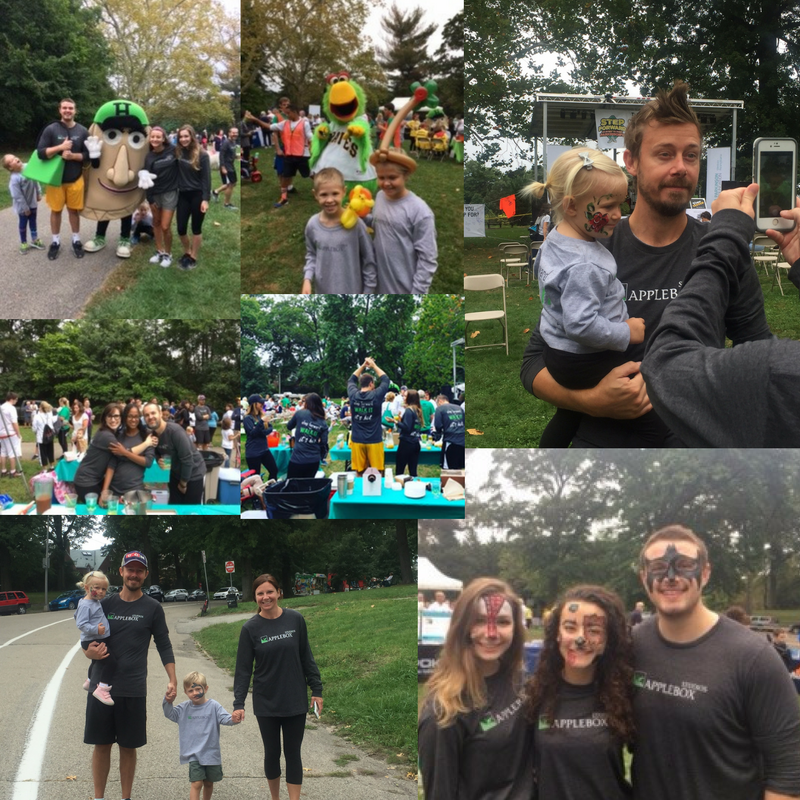 PFWPA succeeded in bringing hundreds of supporters together on the first beautiful Saturday of fall. The family-friendly event even included dogs in tutus, face-painted children (and Apple Box interns). It was humbling to see the great attendance of people from many different walks of life—in communal support of the cause. Positivity and great conversation surrounded everyone that came together with the shared belief that hope and perseverance are main ingredients in fighting against Parkinson’s disease. This year, over $80,000 was raised through the Step Forward website.

KDKA’s Jon Burnett was emcee and Paul Martino was the keyboardist, providing a great kick-off to the crowd’s energy. After our 9am coffee, PFWPA program instructors were welcomed to the stage one at a time to lead a series of activities. Each activity not only served as a warm- up for the 1.5 mile walk, but also to showcase the programs offered by PFWPA to those suffering from Parkinson’s disease. Hannah and the Pittsburgh Pirate Parrot joined the fun as we participated in morning meditation styled breathing and stretching, voice therapy and song, light cardio and up-beat social dancing. After the relaxing walk along the scenic reservoir, it was worth it to make final food truck visits. All-in-all, we were favored by the weather, raised money for an important cause and had a kick-ass time making it happen. We look forward to next year!