Well, it’s been more than two weeks since Super Bowl 2015. While fans across America may be signing off of their fantasy teams and working off those extra Sunday game day pounds, there’s no off-season for us marketers. It’s game day every day – the ad game. And it’s up to us to strap up each day, take on the latest tools and trends, embrace the ever-changing market, deliver value and score better ROIs. What’s the ad game mean today? Digital. Or more specifically, this fancy word – programmatic buying. 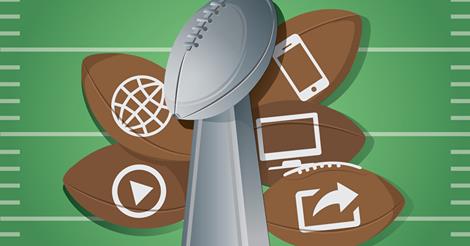 Let’s rewind and take a quick look back at the big bucks spent during this past Super Bowl to better explain. As DigMe’15 (Digital Media Marketplace Summit) zoomed in on in their latest article – the worst call of the Super Bowl wasn’t on the field, but by the corporations who “missed the mark with digital ad opportunities before, during and after the Big Game.” As DigMe explains, the big spenders laid down up to $4.5 million for a 30-second ad. That’s $150,000 per second if you’re missing a calculator. It’s true, your chances are good that more than 100 million some people probably caught at least part of those precious 30 seconds. But DigMe asks us to imagine just how much more digital ad space one could get for that same $4.5 million. Don’t imagine too hard, Rocket Fuel, a digital-media buying and programmatic platform laid it out for us. Here’s what they found:

Basically what their conclusion points to is this: instead of throwing all your eggs into one basket and showing a thirty second tv spot for anyone or everyone to see, change your mindset and start thinking more holistically about the entire marketing ecosystem, including the value that programmatic buying brings. At this point you might be thinking 1. OK. digital – a no brainer and 2. wait, wait, what the hell is programmatic buying?

Programmatic buying is a fancy phrase that means the application of artificial intelligence and big data to bid on an advertising inventory source, through an ad exchange, in real time, for the opportunity to show one specific ad, to a specific consumer, in one context, on one device. Or as AdExchanger nicely puts it: “It uses real time systems, rules and algorithms to automate the delivery of data driven, targeted and relevant experiences to consumers as they interact with a brand’s many touch points.”

Did we lose you? Here’s an example: Rad Snowboard shop in Aspen wants to sell more snowboards. So, Rad Snowboards hires a team who offers programmatic marketing strategies and is thus able to identify online consumers by demographics, geography, interests, behaviors, time of day, weather and device. For Rad’s, he wants consumers who live within mountain range, who are in their late teens or twenties and who search for and download snowboarding content through multiple devices. That kind of consumer is of great value to Rad Snowboard shop. The team the shop hires then uses real time of first and third party data to identify the best online audience for the campaign and then buys digital ad inventory through an auction one impression at a time and across tv, tablets, mobile devices and whatever other place the audience cares about. Those ads are then highly personalized based on each consumers unique interests and behaviors. Like on the side of a sports blog or on a teenage boy’s Facebook feed. Intelligent connections are made. Insights are generated. Performance is optimized. What’s the cherry on top? Speedy, trackable conversions that same day the campaign runs.

Let us make clear however, this is no flick off the shoulder to TV commercials. In fact, ad geeks are calling this a milestone for the future of programmatic buying of TV commercials. Oreo, is one brand who has already started leading the way. Big brand Oreo had the very first Super Bowl ads brought through programmatic buying. Oreo ran a 15-second spot during the halftime show of the Super Bowl, but the ad only aired in Erie, PA to about 100,000 people. In an AdWeek Interview, Oreo and their tech team said the spot was meant to show regionally, where “broadcast affiliates appear to be more eager to embrace a new way of ad buying that cuts out manpower and a lot of paperwork.

A blind person without tastebuds could even agree Oreo is a brand with show stopping content marketing. That mixed with programmatic media buying is bound to be a win. Now some may say a great story knows no bounds, but why pay for a probably? A good story mixed, seamless art direction and a holistic, targeted marketing approach, at least from our ad geek seats is looking like a game changer and definite win for brands today.

There’s always next season for the Seahawks, but for brands who aren’t focused on the new tools and services to maximize their spend, for the brands who aren’t embracing digital and video – they’re falling behind. Don’t leave your luck up to a coin toss. Embrace a year of digital.