My Two Cents on Video Production and Value

My Two Cents on Video Production and Value

Two big words in video are production and value.  What does production value mean?  Often there is a negative financial connotation associated with that phrase, but it doesn’t necessarily mean that a lot of money has to be spent.  It’s nothing tangible or monetary, you just know it when you see it.  There’s this great fear that you need a high budget to get production value out of your video.  It’s just not true.  Video production and value can be masked by intelligence, preparation, and hard work.  And it can most certainly be masked by creativity.  It’s possible to make something stylish and attractive, yet affordable.  There are plenty of great examples of work done affordably that give the impression of high production value.  And they can come from a video company right here in Pittsburgh.  It doesn’t have to be Hollywood or New York.   My advice is watch films and videos.  Watch them closely.  Mimic them.  Emulate them.  We benchmark every video project we work on with our clients.  It’s a valuable form of communication.  Sometimes you can’t describe a transition, or an effect.  Find the videos that can represent your vision and let them guide you, ultimately making them your own. 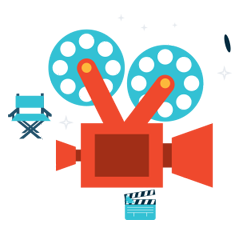 On the opposite side of the video spectrum, I’ll throw out two more words – double rainbow.  We all most likely know what that means.  If not, Google it.  It will take you 3 seconds to get in on the joke.  Regardless, production value can be thrown out the window if you have the right gimmick, gag, or just good timing.  Viral videos oversaturate already oversaturated social media & web sites.  But, they are harmless & they are here to stay.  People can’t get enough of them.  They hit some nerve.  I guess it’s human nature to share, to create, to vent, to be bored, to participate, to be honest, to connect, to express, to inspire.  All qualities I would never want to extinguish and all goals I try to achieve while creating.  So while I continue to look for production value out there, there are many more double rainbows.  If the desired result of your creation is accomplished, I guess it doesn’t matter which.