Hello, Apple Blog. It is currently July 29th, 2021 and you know what that means: Tokyo 2020 is in full swing! In case you’ve been living under a rock, here’s a quick recap: the 2020 Summer Olympics were postponed last year due to COVID-19. Now, with vaccines becoming more widely available, the IOC elected to resume the Olympics, and the opening ceremony kicked off on July 23, 2021. 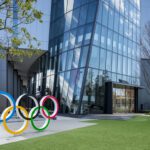 Like the good patriot I am, I’ve been tuning in to cheer on the likes of Simone Biles, Sunni Lee, Katie Ledecky, and my personal favorites, the US beach and indoor volleyball teams. I’ve also been paying close attention to those corporate ad spots – you know, the ones that are going for literally close $800,000,000 nowadays – to see how those key sponsors are approaching the more fragile nature of the Olympic messaging this year.

And now, as the first week of the 2020 Summer Olympics comes to a close, I’m sure everyone is drawing conclusions and forming opinions about some of these more prominent commercials.

So… I’ve decided to share with you some of the ads that were more memorable – for better or for worse, along with some of the tea surrounding them.

This past month, some Olympic sponsors were left scrambling to change seemingly benign ads due to global polarization among COVID concerns. United Airlines’ campaign was originally centered around unity, specifically unifying the US and Tokyo through air transport. This was quickly scrapped as it became evident that COVID concerns were much higher in Japan than they were in the United States, and therefore, it might not be smart to encourage “unity” with a country who banned all spectators three weeks out from the Olympics. They caught this in time to produce a new campaign [ https://www.youtube.com/watch?v=uTHJ4wQhIM0 ] featuring US Olympic and Paralympic greats practicing in an aircraft hangar, featuring the tagline “Let Yourself Fly”. Pretty generic, but really well received—it seems the internet loves seeing the different athletes in action. It’s simple enough, but hard hitting and effective – in a way, it kind of speaks for itself.

Long time Olympic and Paralympic sponsor Toyota was not as lucky as United when it came to fixing COVID-related considerations– though you wouldn’t know that from watching American broadcasts of the Olympics. In fact, Toyota has multiple different ads, featuring Mexican Gymnasts  [ https://www.youtube.com/watch?v=Ik82joBCD6Y] Paralympic athletes [https://www.youtube.com/watch?v=LIYLnI5F0s0] and athletic profiles,[https://www.youtube.com/watch?v=Pr3jR2keirk] running on primetime broadcasts in the continental US, centered around innovation and progress in the face of adversity. (I will admit, that Jessica Long commercial made me shed a tear or two)  In turn, you would think that this Japanese-born company would be thrilled to run ads centered around national pride, progress, and excellence all throughout their home country. I mean, anyone who’s tuned into the Olympics even once knows that some of the biggest archetypes of Olympic ads are patriotism and national excellence. However, Toyota pulled every single one of its Olympic-themed advertisements from Japanese airwaves, and even went as far as encouraging its executives to not attend any Olympic-related events. Why? Because instead of the patriotism and focus on national excellence that Olympics typically evoke, the majority of Japanese citizens actually heavily opposed the resuming of the “super-spreading event”. Toyota had to flush millions of dollars in advertising in order to stay in the Japanese public’s good graces.

Nike attempted to take a much more modern approach [ https://www.youtube.com/watch?v=Rm_aiDpkGmQ ], touching on topics in activism to rally around a more general theme of inspiring innovation and progress for the future. While the idea of progress itself is, of course, great, the commercial’s emphasis on social justice buzzwords, was met with cries of “fake woke” and “pandering” from all sides. Shouting out athlete’s mental health (a nod to the controversial Naomi Osaka debacle),  featuring Sha’Carri Richardson, and prophesying a future where “The WNBA will pass the NBA in popularity”, this grasp to fit with the times is coming across as inauthentic. Calling for unity and progress under these terms actually proves to be even more polarizing , especially when we learn that Nike allegedly doctored the voiceover to be less “woke” in different countries. In this case, trying to appeal to ideas of unity, inclusivity, and progress backfired by taking a much too “out of touch” approach.

Proctor and Gamble was much more subtle, centering their campaign [ https://www.youtube.com/watch?v=E2rAXgR-qlw ]  around “kindness”, “loving your neighbor”, using the tagline “lead with love”. Part of a series of slightly longer athlete profiles, the main commercial features clips of athletes helping their opponents or contributing to charity endeavors. Staying on brand, the voiceover is one of a mother, seemingly talking to her child. Of course, such a theme as being a good sport and kind to people is one of the most universally appealing things I can possibly think of. Throw the motherhood card in there, and P&G has themselves a winner. Their other, 2-minute ad [ https://www.youtube.com/watch?v=akKI70uJ9pg] is an extension of these values, following a series of athletes as they grow up to become Olympians, guided by their mothers to have respect and compassion. Featuring multiple languages and athletes representing multiple countries, these ads were watched by an international audience via streaming service, and received very well. Internet comments specifically pointed out that the overall message was beautiful and moved some to tears. And, well, isn’t that what advertisers really want?

And I will leave you with one more ad that, although being very well executed, I mostly just want to include because it’s super cool. Dick’s “There She Is…” ad [https://www.youtube.com/watch?v=xXUtbJVzMEQ ]is a compilation of female athletes absolutely kicking ass, set to the classic 1950’s Miss America theme song. We got it all in this ad, folks. We got appeals to nostalgia, we got inspiration, dedication to hard work, and a nod to progress. And although these themes are definitely more national and not global, it really is a great example of using modern considerations to appeal to widespread, overarching themes, because the internet has spoken, and people adore it. One YouTube comment even read “Thank you, Dicks! You have no idea what this means to a girl growing up in the 50s! Best commercial (I’ve) seen in years” (Literally, rip my heart out, why don’t you). The underlying arc of empowering female athletes is, of course, met with some pushback. But overall, it seems the consensus is that people love the juxtaposition of putting a song previously simultaneous with the epitome of the perfect American woman over videos of girls breaking barriers—but the song itself also evoked a lot of nostalgia. A lot of people also stated that they thought of their daughters immediately (once again, my heart!). The commercial seems to perfectly tow the line between pushing the envelope and appealing to audiences by showcasing relatable, realistic scenarios and evoking patriotism while acknowledging that times are changing.